Blog
‘Hillocks of Stone’; The towers of Raby Castle

“One feels as if these forked cliffs of stone had something of the solemnity of a mountain top, in remembering the hundreds of years they have towered above the country, and stood unshaken as the wind howled and raved around them”.

For many visitors one of the most memorable features of a visit to Raby Castle is the impressive series of towers. To celebrate this impressive aspect, the Raby Castle Team have created a new outdoor tour of the medieval architecture, with a focus on the nine magnificent towers.

Fulfilling a combined purpose of accommodation and defence, most of the towers have stood since the 14th century and give Raby its unique character. We take a closer look at this feature of the castle architecture and delve into some of the lesser known facts about these impressive structures.

Raby Castle is one of the largest and most intact medieval castles in County Durham. Once a fortified seat of the Nevill family, since 1626 it has been the home of the Vane family, the most recent of which is the current owner, the Twelfth Lord Barnard.

Before the Norman Conquest, the site on which Raby Castle now stands was part of Staindropshire; land holdings in the possession of King Canute which he gifted to the priory of Durham. It is likely that the castle’s Entrance Hall sits on the site of an earlier Anglo-Saxon Hall, from which the building developed with eventual fortification in the 14th century.

Between the 13th and 17th centuries, royal permission was required to fortify a manor house and turn it into a castle. Raby’s ‘License to Crenelate’ was granted in 1378 but as the land fell within the Palatinate of Durham, it was granted by Bishop Hatfield rather than the monarch. The license acknowledged both the status of the family and the fortification of the building and much of the 14th century structure is still evident. 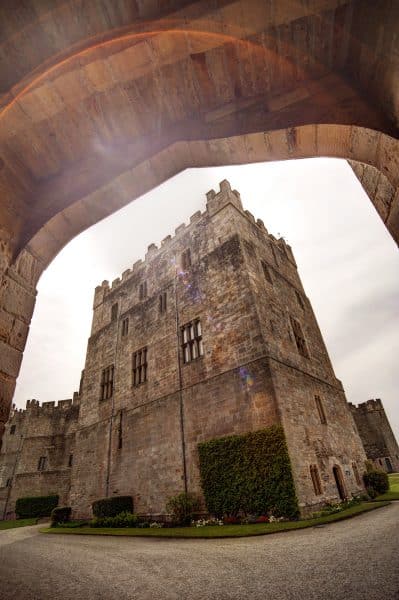 Today’s visitors enter through the gatehouse where they are met by the impressive sight of Clifford’s Tower. The tallest and largest of Raby’s 9 towers, it stands at an impressive 24m (80ft) high.  If the gatehouse was breached during an assault on the castle, Clifford’s Tower was the next point of defence; its 3m thick walls were built to withstand attack.  The naming of the tower likely originates with a strategic marriage, when in the latter half of the 14th century Euphemia Nevill of Raby married Robert Clifford of the influential Yorkshire family (who give their name to another Clifford’s Tower in the centre of York).

The next tower along the north side of the castle is the Kitchen Tower, originally built in 1360 and used daily up to the 1950s. It was originally detached from the castle interior as a precaution against the spread of fire.  Within the walls of the Kitchen Tower, about 4.5m above floor level is a cut passage-way with openings at regular intervals, a platform through which the castle could be defended. The original arrow slits were enlarged in the 17th century to form the windows that are in-situ today and were no doubt a godsend to the cooks.

The kitchen is a good point at which to think about the people who built Raby Castle. Whilst the Nevill family held the purse-strings, the development owes much of its character to the 14th century Master-Mason John Lewyn. The architectural historian Malcolm Hislop has charted Lewyns influence on monumental architecture across the north-east of England and beyond.  Today, Lewyn’s LinkedIn profile would read ‘Architect’, but when Lewyn was professionally active in the latter half of the 14th century, his role probably combined elements of engineer, draftsman, mason, project manager and surveyor. At Raby, his work included fortifications and towers, including the kitchen and chapel. The granting of the License to Crenelate in 1378 probably marked the completion of his work.

The Kitchen Tower at Raby is characteristic of Lewyns style. There are similarities with the Great Kitchen of Durham Cathedral, which was built between 1367-74 when Lewyn was principal mason to the Bishop of Durham. From the outside, the kitchen tower resembles many of Lewyn’s other towers at Raby; plain and square in shape, with neat blocks of stone that are stepped in at different levels. Writing in her Handbook for Raby Castle in 1870, the 4th Duchess of Cleveland wrote of the towers built by Lewyn,

“Nor is there a trace of ornament to be found anywhere; as if the builders, in their stern purpose, disdained all that was not intended for use, and the severe simplicity of their work certainly shows no striving for picturesque effect”.

Journeying on from the Kitchen Tower, on the north-east corner is the tower known as Mount Raskelf, whose name comes from lands held by the Nevill family in North Yorkshire. Almost certainly one of John Lewyn’s designs,  possibly build on an earlier foundation, this tower features architectural elements that he would go on to develop in other projects, including corner turrets known as ‘bartisans’, supported by ‘squinches’ or corner arches that join perpendicular sections of wall.

In the centre of the eastern side of the castle lies the Chapel Tower; created by Lewyn to house the chapel and a guard room as well as a fortified gateway or Barbican. The Chapel Tower was altered in the 18th century when the barbican was demolished to provide a new route for carriages through the entrance hall. The structure can be seen on early 18th century engravings of the castle which show other characteristic features of Lewyn’s work in situ,  including the life-sized stone figures (known as defenders), similar to those at Alnwick Castle and removed at Raby to the Gatehouse. There may have been further similarities with Alnwick Castle’s impressive barbican which is decorated with a carving of the Percy Lion, as Raby’s featured the Raby Bull.

Tower number 5 is Bulmer’s Tower. Named after Bertram de Bulmer, the influential grandfather of the Norman heiress Isabella de Nevill who married Raby’s Saxon owner, Robert FitzMaldred in the late 12th century. Towards the top of the tower, a lower-case letter ‘b’ for Bulmer, features on the outward facing facades.  Bulmers Tower once stood isolated from the castle and is the only tower at Raby built of millstone grit. It has an unusual five-sided plan, unlike Lewyns square towers, which has been compared to similar five-sided towers in Denmark.

Passing along the southern side of the castle, Joan’s Tower in the south-west corner is named after Joan Beaufort, the daughter of John of Gaunt who married Ralph de Nevill of Raby in 1396. Half- sister to Henry IV and grandmother to Edward IV and Richard III, it is through Joan that a line to the current Royal family can be traced.  On the warmer south side of the castle, Joan’s Tower has provided accommodation into the 21st century, and centuries of enlargements and internal alterations chart the challenges of adapting a 14th century building for modern life. 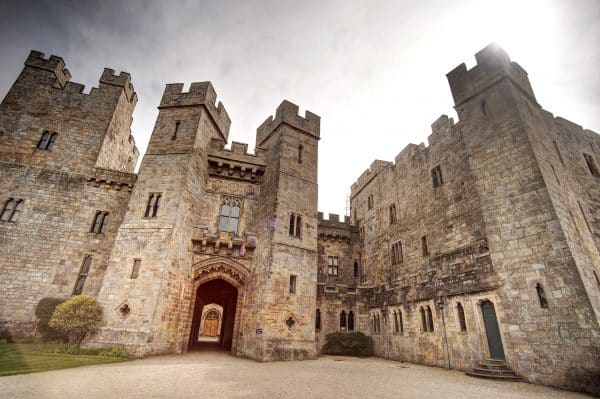 The interior of the castle is accessed on the west side through the Nevill Gateway. This impressive tower contains a beautifully vaulted fortified gateway which would have included an inner and outer gate, as well as a portcullis. Machicolations or murder-holes can be seen here (as elsewhere on the castle perimeter) as a further defence against attackers. The three shields that can be seen on the Nevill Gateway (Nevill, St George and Latimer shields) are each surrounded by the ribbon of the Order of the Garter which Lord Nevill received in 1369, only 21 years after it’s creation.

To the right, the Watch Tower – our eighth tower – incorporates two small guard rooms opening onto the roof. Beyond this is servant’s hall, once the site of the garrison. It is here that the walls are strongest, being in places no less than 6m/20 ft thick.

At the heart of the castle interior lies The Keep, our final tower. Heavily defended by the exterior fortifications, The Keep was the site of domestic accommodation and facilities, including the castle’s well. Under siege, control of the water supply was critical for survival and the defences that protect this important tower is a final reminder of the dual purpose of all the towers as both fortification and living space.

The towers feature in a new outdoor Towers and Terrace Tour at Raby Castle.

For details of this and future tours exploring the history, architecture and art of Raby Castle, subscribe to our free newsletter at https://www.raby.co.uk/about-us/newsletter/

A Guide to the Towers

“Yet every painter’s eye must love the unsought combinations of light and shade in these great square masses of grey stone – ‘hillocks of stone’ – clustered irregularly together, with their deep angles and recesses, and the tapering watch-towers above.  Seen at a little distance from the north, they produce a really magnificent sky-line towards the west, especially when the long range of ‘battled towers’ stands out in relief against a real winter sunset”.

How to read a Country House: Jeremy Musson in association with Country Life Ebury Press, 2005