To mark Shrove Tuesday our chef Tom has shared his ultimate pancake recipe for you to make at home. His recipe is a modern take on a traditional Pancake recipe from the Raby archives, which is also reproduced below. You’ll find a link to download Tom’s recipe at the bottom of the page.

During lockdown Raby Castle’s fantastic volunteers have been helping to transcribe some of our archive manuscripts … and look what we found especially for Shrove Tuesday! Here this 1770s recipe for pancakes is quite different to the more usual French-style crêpe or the fluffy American pancake, separating the whites from the yolks and using water rather than milk. We’d love to see pictures of the results if anyone tries this recipe at home.

Take four eggs for three pancakes, so in proportion to the quantity you want. Cast your whites on a dish until they rise to a snow, then cast your yolks in the bowl you mean to make your pancakes in with a little salt. Then mix in your snow with your yolks, then mix it with water to a proper thickness. Then mix your whites and stir it all together. Try not to break the whites too much. Then butter your frying pan well and do one side in the pan, fold the other before the rise until it rises well. 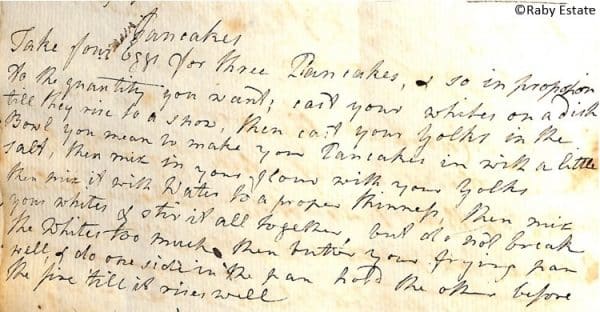