Raby is surely one of the most impressive intact castles in the North of England. Situated near the village of Staindrop in County Durham it was built in the 14th century by the powerful Nevill family. Originally moated and accessed via a drawbridge, the Castle was built as a palace fortress.

The Nevills lived at Raby until 1569 when, after the failure of the Rising of the North, the Castle and its lands were forfeited to the Crown. In 1626, Sir Henry Vane the Elder, Member of Parliament and important member of Charles I’s household, purchased Raby from the Crown. The Vane family still own Raby, the present owner being the 12th Lord Barnard.

Today the stables, coach house, coach and carriage collection are popular with visitors, providing a snapshot of life before the advent of the combustion engine. Before railways, travelling to Raby Castle from London could take four days, with horses being changed every twenty miles. The unpredictable weather of the north-east and the varied condition of the road network meant that long journey could be uncomfortable and potentially dangerous. Visiting the castle in the late 1700s the dramatist George Colman recalled;

“… it rained heavily and incessantly, and we had met with delay, and petty accidents, and vexations, at every turn. In the last seven miles, after sunset, a fog arose; one of the horses cast a shoe, and his rider dismounted to grope for it in the mud and in the dark…  we were chilly, hungry, impatient, comfortless, sitting dinnerless in a post-chaise, and waiting the issue of a hunt after a horse-shoe”.

His arrival was a decidedly more cheerful experience as the chaise entered the Castle’s impressive Entrance Hall. Originally a medieval structure, it was adapted by architect John Carr for the 2nd Earl of Darlington to celebrate the coming-of-age of his heir in 1787.

Pevsner describes this alteration to the building as “an unorthodox transformation”. It was driven by the development and increasing use of carriages from the late-17th century. These vehicles had become too large to turn in the castle’s medieval inner courtyard. Rather than enlarge the courtyard, Carr adopted a “drive-through” approach, thereby eliminating the need for turning space. To do this, he created a carriageway that ran right through the Castle’s Grand Entrance Hall, exiting through a gateway below the Chapel. His scheme resulted in significant alterations to the 14th century building; the Barbican was demolished and additional height was achieved in the Entrance Hall by raising the floor of the first-floor Chapel and Barons’ Hall. On the ground floor, Carr created a vaulted ceiling supported by stunning octagonal scagliola pillars.

This transformative scheme made it possible for carriages to drive straight through the hall, eliminating the need to turn in the courtyard and providing an impressive welcome. Picking up on Coleman’s account;

“As we passed through the outer gateway of the Castle the vapour was dense upon the moat, and we were enveloped in the night-fog … but, lo! On the opening of a massive door, a gleam of light flashed upon us: crack went the whips, as we dashed forward at full trot, and in a moment drew up, not to a piazza, nor a vestibule, nor a flight of steps in a cold courtyard, but before a huge blazing fire in a spacious hall. The magical effect of this sudden transition, from destitution to luxury, has never occurred to me anywhere else…”.

His wonder at this lavish and unexpected welcome was echoed by Sally Stevenson. The wife of the American Ambassador was the guest and a good friend of 1st Duke and Duchess of Cleveland. Writing in 1838 she describes,

“…astonished travellers find themselves in a magnificent Gothic Hall, the carriage way passes immediately through it, the roof of which is arched and supported by 6 pillars – on each side of the carriage way … there are two fire-places, and when the Hall is lighted up by 4 large and brilliant chandeliers.

… The carriages & horses with innumerable liveried servants, headed up by the groom of the Chambers, the lights, the splendour and above all the novelty is quite bewildering and makes on almost fancy themselves in an enchanted castle”.

The alterations to provide the ultimate arrival experience were less popular with one of Raby Castle’s later residents. Writing about the Entrance Hall alterations in 1860, the 4th Duchess of Cleveland quips,

“I have said more than enough of the holy horror with which I regard tampering with ancient buildings” although she does concede, “It is such a hospitable welcome to all-comers”.

Raby Castle’s unique entrance was recreated in recent years when the Castle served as a location for filming. In 2016 the ITV television series Victoria saw carriages delivering ‘royal guests’ to the Entrance Hall once more, including actress Jenna Coleman in the title role, experiencing a similar welcome to her 18th century namesake.

The Entrance to Raby Castle through the impressive 14th Century Nevill Gateway led to a small inner courtyard with insufficient space to turn the increasingly impressive coaches and carriages of the 18th century. Rather than enlarge the courtyard, a ‘drive-through’ approach was adopted by the 2nd Earl of Darlington’s architect, John Carr. 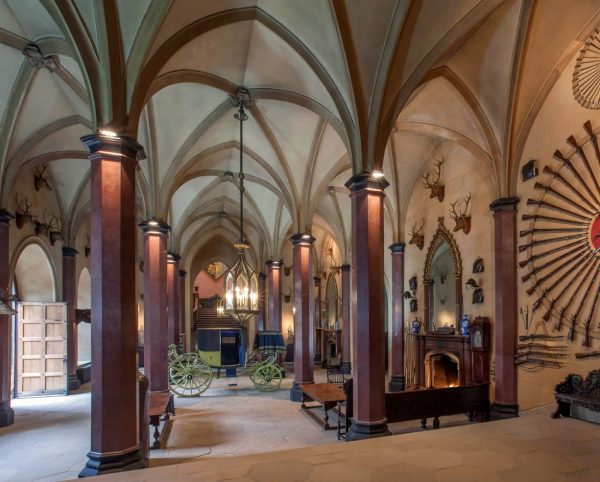 The Entrance Hall today still provides a warm welcome for visitors. Here the State Coach built for the Duke of Cleveland c.1810-20 utilised the ‘drive through’ arrangement. 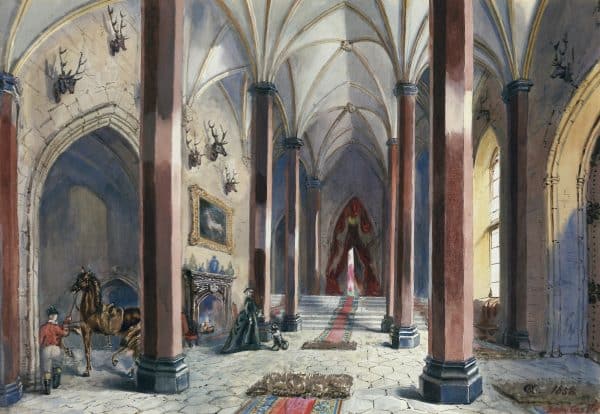 The Entrance Hall at Raby Castle depicted in a watercolour of 1858 shows comfortable carpet runners and a roaring fire to welcome visitors.