This week, as part of Historic Houses’ Medieval Mondays theme, our new Interpretation and Engagement Assistant, Lauren Foster has been exploring the medieval coats of arms that can be found around Raby Castle.

The use of coats of arms dates back to the 11th century. Initially limited to warrior chieftains, by the 12th century, they became more commonly used by feudal lords and knights. Over time, they have become synonymous with a family name and passed down through generations.

Heraldry is a method of communicating identity from a coat of arms and was initially used to enable knights to identify each other on the battlefield. Different colours, divisions and patterns indicated different traits. For example, heraldic crosses or dissections of a shield could represent protection and defence, and certain colours represented bravery or wisdom. As heraldry evolved, it became more important to represent family lineage, so arms are quartered, this showed two families who have joined in marriage.

At Raby Castle once you start looking, coats of arms can be found everywhere; from archives, wall paintings, and day-to-day items in the collection to stained glass windows, the architecture and carriages.

Examples of Raby Coats of Arms: The Nevill Gateway

Above is the usual open machicolation, and just beneath it are three shields – 1st, Nevill; 2nd, St. George; 3rd, Latimer – each encircled by the Order of the Garter, which Lord Nevill received in 1369.  These shields of arms carved in stone were a common North country practice…’
– 4th Duchess of Cleveland, 1870

A surviving example of Raby Castle’s medieval coats of arms, belonging to the Nevill family, can be seen on the Nevill Gateway, created during work to improve fortifications in the fourteenth century. 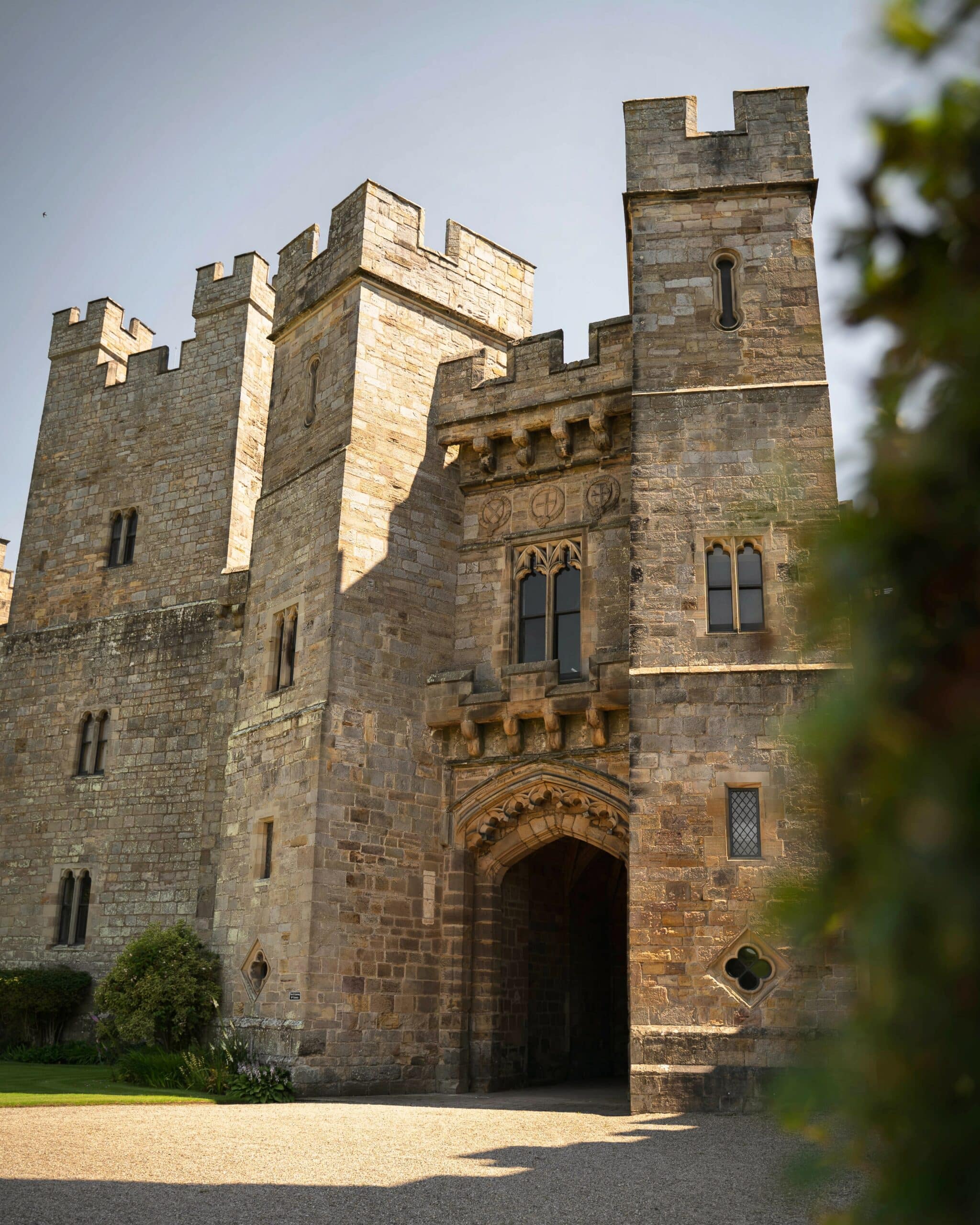 On the left is the Nevill Coat of Arms, described in heraldry as ‘Gules, a saltire Argent.’ This in layman’s terms stands for ‘Red, with a white diagonal cross.’ Red traditionally was the colour of a warrior or patriot, and silver or white (argent) represents peace or wisdom.

The centre Coat of Arms is St. George. The familiar red cross on a white background became associated with St. George from the Late Middle Ages, who was depicted as a military saint and had ties to the Crusades. The Order of the Garter’s Arms is a cross of St George, surrounded by the Garter. 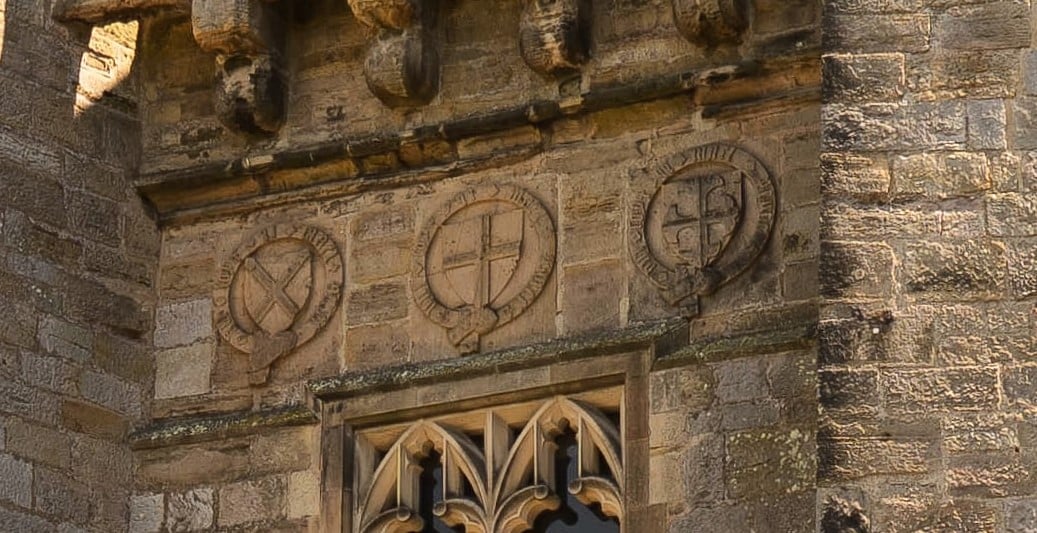 The Coat of Arms on the right belongs to the Latimer family, described in heraldry as ‘Gules, a cross patonce or.’ Gules is again the red background. A cross patonce is the type of cross with embellishments on the end, and ‘or’ means gold. This is said to signify wisdom, generosity and faith.

Each Coat of Arms is surrounded by a garter, the emblem of The Order of the Garter. John Neville, the 3rd Baron Neville, was made a Knight of the Garter in 1369. This was one of the most senior orders of chivalry and was awarded in recognition of a national contribution. For the 3rd Baron, this was awarded for his political and military efforts in France and Scotland on behalf of the Crown. The Garter is inscribed with the order’s motto ‘Honi soit qui mal y pense’ (Shame on him who thinks evil of it.)

Other Medieval Coats of Arms around Raby

Within the Raby Chapel are stained glass armorial panels depicting the Arms of the Nevills. In the image below, on the right is again, the Nevill Coat of Arms. In the centre is the Arms of the Kingdom from 1340-1377. King Edward III quartered the royal arms of England with the ancient arms of France to signal his claim to the French throne. The English sections contain three golden lions on a red field. The French sections contain fleurs-de-lis on a blue field- blue being symbolic of piety and sincerity.

On the left is a representation of the Nevill Bull holding the Nevill Arms. The bull’s head is the crest of the Nevill family and can be found dotted around the castle. This motif was originally carved into the Barbican Gateway, which was then moved to Raby Home Farm in the 18th century. A crest can be found at the top of a more detailed coat of arms. A bull symbolises bravery and generosity, and represents the Nevill’s Bulmer ancestry. Geoffrey de Neville in 1176 married Emma de Bulmer, who was heiress to the joint largest estate in County Durham at the time. This greatly attributed to the size and power of the Nevills’ Estate.

The Nevill bull was a popular feature within Raby’s Visitor Books, in which guests to the castle were required to leave an artistic contribution related to their time spend at Raby. We particularly enjoy the depiction of the bull waltzing into the castle ‘to ruffle it, with ye Gallants of Raby’! 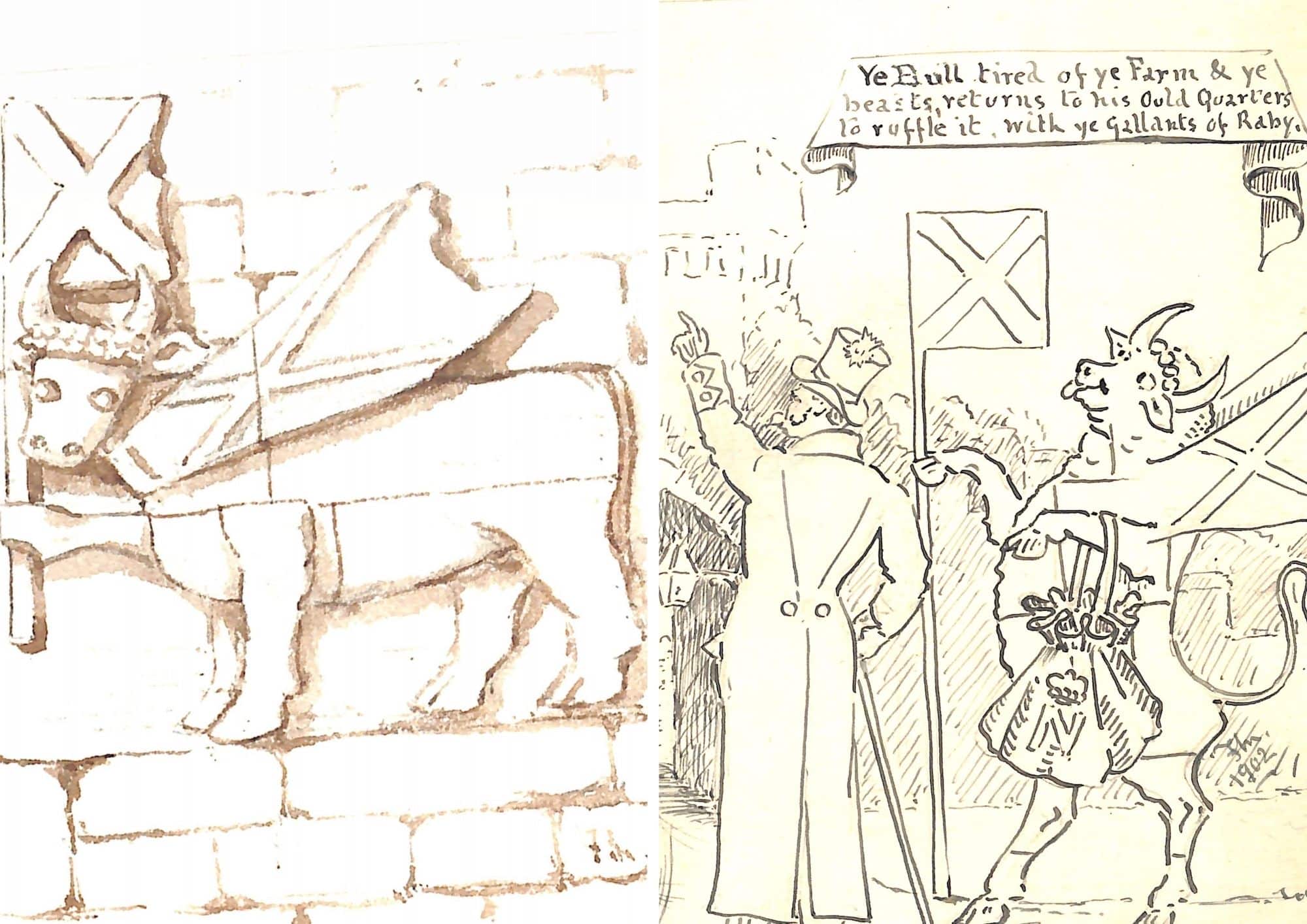 To find out more about our fascinating collections and interiors within Raby Castle, visit our blog.

Delve into the history of our beautiful chapel at Raby Castle

We are delighted to hear that our application to the Castle Studies Trust has been successful, for funding to support the creation of a digital model of our 14th century Nevill stronghold, Raby Castle.