For today’s Historic Houses’ Medieval Monday we caught up with Interpretation and Engagement Assistant, Lauren to gain an insight into one of Raby’s oldest and most popular features – the Great Kitchen. Still a fully functioning kitchen up until the 1950s, many of the medieval features seen today have been adapted and modernised throughout the years. Understand how the space would have originally been used for serving 14th century noble families, such as the Nevills, with the help of quotes from the 4th Duchesses’ Handbook.

‘A right ancient and singular relic of the genuine baronial time.’

‘The most curious part of the whole Castle, for it has been scarcely altered from what it was when the great banquets of the feudal ages were served from it.’

Built in the 1360s, as part of the development of the castle likely to have been carried out by Master Mason John Lewyn, the Great Kitchen is a grand room which fills the Kitchen Tower. It was probably originally a separate structure from the rest of the Castle, to prevent the risk of fire spreading and avoid any kitchen smells reaching the house.

A passage is cut in the thickness of the walls encircling the kitchen, which served two purposes. Defensively, it allowed men-at-arms to keep watch through the original arrow slits, which were later widened into the current windows. It also provided access to the Barons’ Hall for serving food.

The high, arched ceiling and ventilation shaft in the centre of the roof allowed for smoke and heat to escape, while encouraging the circulation of cool air. A similar, more ornate ceiling in the Prior’s Kitchen at Durham Cathedral was also likely to be the work of John Lewyn.

‘An ox might easily be roasted whole at one of these vast furnaces, and I have no doubt many have been so roasted in the old days, when spits mighty enough for the purpose could be put into requisition.’ 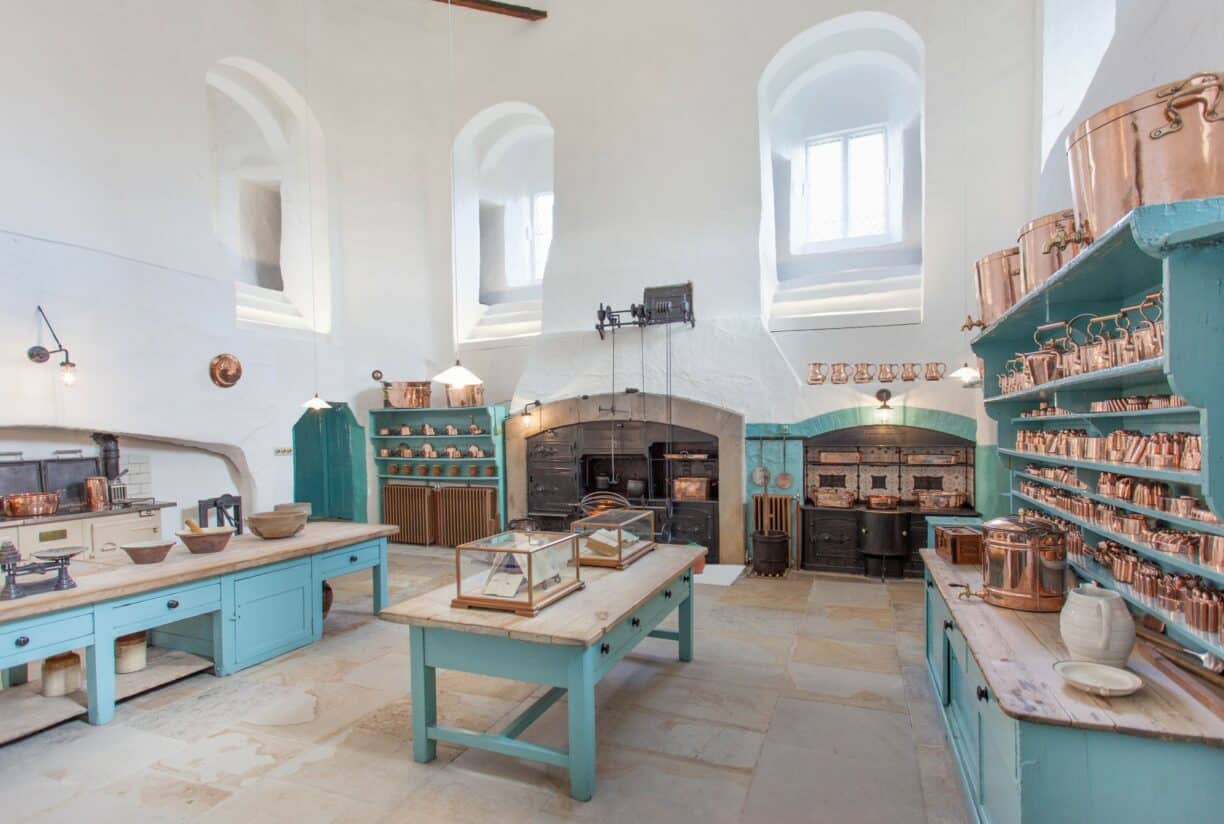 Cooking was originally done on four open fires, with meat roasted on spits turned by small boys or dogs on tread wheels. Great kitchens in medieval households were principally staffed by men, due to the strength needed for larger-scale catering. The most junior servant in a medieval kitchen was the scullion. They washed cooking utensils and dishes, and cleaned and swept the service rooms and courtyards. In the later centuries, these jobs belonged to a scullery maid. Numbers of women servants began to grow from the fifteenth century, but whilst by the sixteenth century female servants were more common, this was not in positions of major responsibility.

During the Middle Ages, sides of meat were hung from the beams that run along the corners of the room, which protected them from vermin and helped with preservation, as they became lightly smoked hanging above the fires. Kitchen staff had access to many basic variations of cooking utensils available today, such as frying pans, pots and kettles. Other tools more specific to cooking over an open fire were the spits of various sizes and material to skewer different types of meat. There were also cranes with adjustable hooks, so cooks could move pots away from the open flame and prevent burning.

‘Having little or no communication with the neighbouring town, the lord and his vassals were forced to provide and keep in store for themselves the necessaries of life.’ 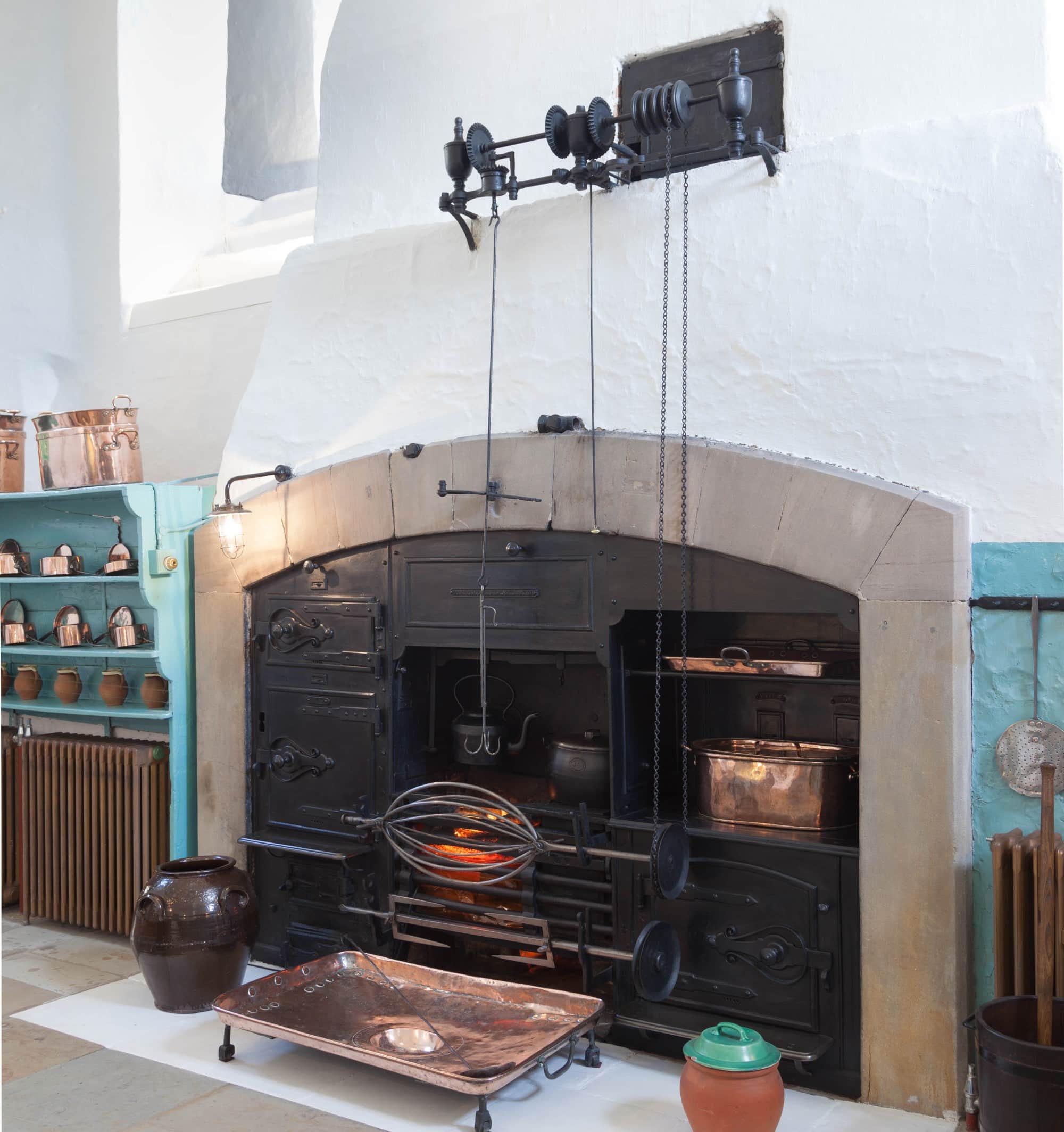 A medieval kitchen would be connected to several other service rooms needed for storing and producing food. This includes a larder for preserving food, a cellar for wine, and a variety of store-rooms. A buttery (originating from the same word as ‘bottle’) was a store for beer and wine, and a pantry (from the work ‘pain’ which is French for bread) was to keep bread and perishables. A butler would oversee the buttery, whose role in the medieval times was to see that cups were clean, people’s drinks were topped up and the table was laid.

Developments in technology throughout the centuries altered the roles of those working in kitchens, enhanced food preservation capabilities and increased cooking speed. In the 19th century, one of the fires was replaced by a cast iron range which used heat convection to turn the spit: a spinning fan in the chimney drove a ratchet, which turned a spindle, which kept the spit rotating. In the 20th century, a more modern stove-top range was installed, but the outline of the original medieval fireplace is still visible behind it.

‘It is, in fact, those old towers, those old courts, the great baronial hall, and the kitchen, that are the objects of real interest at Raby; remnants of its antiquity, the contemporaries of those who stamped them with the feeling of belonging to them and to their fortunes.’ 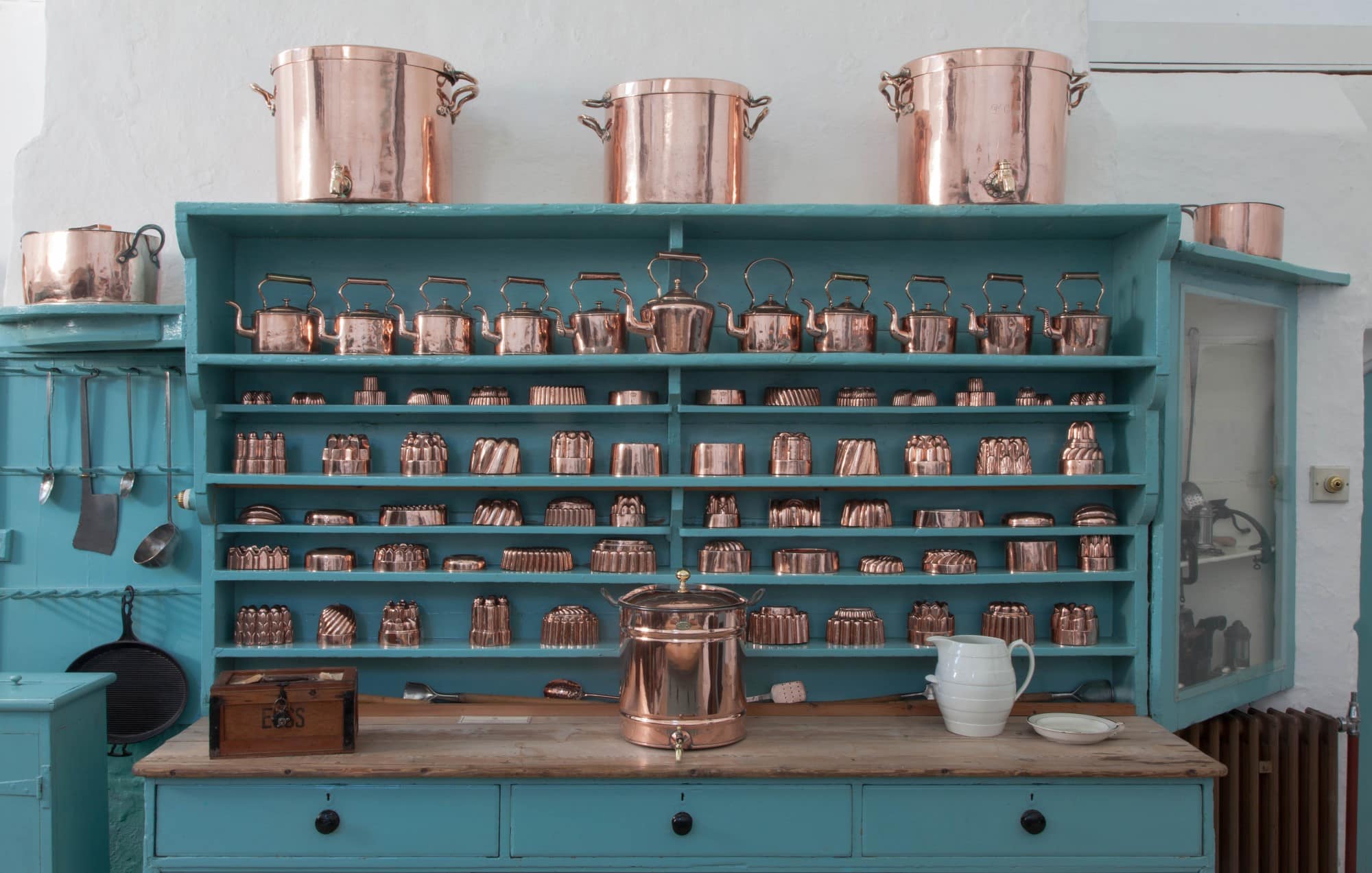